Dick And Jane: A Primer On Christian Life 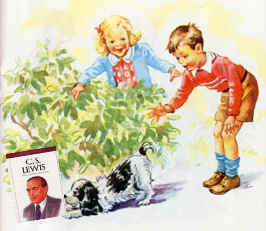 See Dick. See Jane. See Spot. Dick and Jane are Christians. Spot is not. He is a Dog..

See Dick read the Bible. Read, read, read. The Bible says that God forgives all our sins. That makes Dick glad. "If God forgives all my sins, that means I can sin all I want, and not worry," he says.

"That is bad theology," says Jane. Spot barks. "Bark, bark, bark." He does not like Dick's theology either. Spot should know. He reads C.S. Lewis.

But that does not matter to Dick. He likes to sin. And God will forgive all his sins, right?

See Dick sin. Sin, sin, sin. He likes to get mad at people, especially Jeremy Hess. He likes to turn red in the face and shout at Jeremy. Red is a pretty color. Do you like the color red?

"You should not hate Jeremy," says Jane. "You must love him."

See Dick stuff a rag in Jane's mouth. Ugh. Dick does not care if he is sinning or not. He is forgiven. He is free.

"You must not eat so much," says Jane. "People in other parts of the world are hungry. Jeremy is hungry. God does not want us to be gluttons."

See Dick laugh at Jane. See Dick lock Jane in her locker and then go home.

"Bark, bark, bark," says Spot in Dog language. This means, "Did you lock Jane in her locker again?"

Dick has a different sin for every day of the week. On Sunday, he gossips at church. On Monday, he cheats at schoolyard games. On Tuesday, he lies to his teachers. On Wednesday, he steals from the school bookstore. On Thursday, he is greedy and eats everyone's lunches. On Friday, he plays mean pranks on Jeremy Hess. On Saturday, he is cruel to animals.

Spot leaves the country every Saturday.

But Dick does not worry, He is forgiven for his sins. He is free.

The next day, there is a knock at the home of Dick and Jane. An official looking man is at the door.

"You must come with me," says the man to Dick. "You have been made a slave. You are our property. We are going to put you up for sale today."

See Dick try to close the door on the official looking man for sounding so silly. How silly the man is. Dick is free. He is no slave. See the man stick his jackbooted foot in the door and grab Dick by the collar.

"You are a slave to sin," says the official looking man in jackboots. "You are our slave. And we are going to sell you at an auction today."

See the man take Dick to an auction center. Dick is in chains. "How much do I hear for this slave to sin?" calls the official looking man in jackboots to the auction crowd.

He remembers that Jesus Christ freed him so he could be free not to sin. He was not meant to be a slave to sin and neither are we.

Dick is sold. See him being placed in a jail cell until his new owner comes to claim him. What a rotten day. Rotten, rotten, rotten.

Suddenly the door opens. Is it the new owner? Will he be meaner? Will he let Dick eat Twinkies and malts for lunch?  Will he provide a forklift for Dick's lunch bags? Will he ...

"Uh oh, " Dick says to himself. It is worse than he thought. His new owner is Jeremy Hess.

See Jeremy enter the jail room smiling. See Jeremy open the jail cell door. Will Jeremy take his revenge? Will Jeremy get back all the lunches that Dick stole from him?

"Jesus set me free. I want to do the same for you."

"But I hurt you many times. Why pay to set me free?"

"Jesus paid a heavy price for the world," says Jeremy. "And people were not nice to him."

Jeremy shakes Dick's hand. "I forgive you just as Jesus forgave me and set me free from my sins. He loves you and paid that heavy price for you and everyone else. You are worth the price. You are free."

See Dick leave the cell. Listen to Dick tell Jesus he is sorry for his sins and ask for His forgiveness.

See Dick tell Jeremy he is sorry for the way he treated him and the way he has lived Monday through Sunday. See them go to the school and let Jane out of her locker. See Dick tell Jane how sorry he is and how really sorry he is for not listening to her. Hear Jane tell Dick she forgives him.

See Dick turn from sin. Turn, turn, turn. See Dick choose not to sin when he has the opportunity to do so. Wow, Dick is really free. Free, free, free.

"Bark, bark, bark" says Spot the next day. He is very happy too. He does not have to leave the country on Saturdays anymore. It is hard for a Dog to carry a Bible in his mouth for very long.