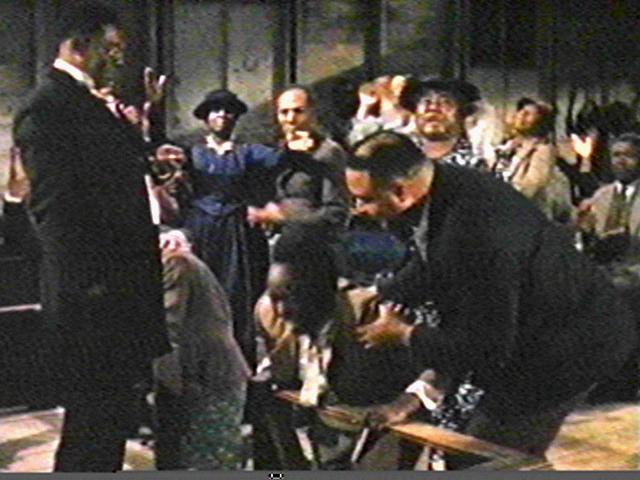 I was saved from sin when I was going on thirteen. But not really saved. It happened like this. There was a big revival at my Auntie Reed’s church. Every night for weeks there had been much preaching, singing, praying, and shouting, and some very hardened sinners had been brought to Christ, and the membership of the church had grown by leaps and bounds. Then just before the revival ended, they held a special meeting for children, “to bring the young lambs to the fold.” My aunt spoke of it for days ahead. That night I was escorted to the front row and placed on the mourners’ bench with all the other young sinners, who had not yet been brought to Jesus.

My aunt told me that when you were saved you saw a light, and something happened to you inside! And Jesus came into your life! And God was with you from then on! She said you could see and hear and feel Jesus in your soul. I believed her. I had heard a great many old people say the same thing and it seemed to me they ought to know. So I sat there calmly in the hot, crowded church, waiting for Jesus to come to me.

The preacher preached a wonderful rhythmical sermon, all moans and shouts and lonely cries and dire pictures of hell, and then he sang a song about the ninety and nine safe in the fold, but one little lamb was left out in the cold. Then he said: “Won’t you come? Won’t you come to Jesus? Young lambs, won’t you come?” And he held out his arms to all us young sinners there on the mourners’ bench. And the little girls cried. And some of them jumped up and went to Jesus right away. But most of us just sat there.

A great many old people came and knelt around us and prayed, old women with jet-black faces and braided hair, old men with work-gnarled hands. And the church sang a song about the lower lights are burning, some poor sinners to be saved. And the whole building rocked with prayer and song.

Finally all the young people had gone to the altar and were saved, but one boy and me. He was a rounder’s son named Westley. Westley and I were surrounded by sisters and deacons praying. It was very hot in the church, and getting late now. Finally Westley said to me in a whisper: “Goddamit,  I’m tired o’ sitting here. Let’s get up and be saved.” So he got up and was saved.

Then I was left all alone on the mourners’ bench. My aunt came and knelt at my knees and cried, while prayers and songs swirled all around me in the little church. The whole congregation prayed for me alone, in a mighty wail of moans and voices. And I kept waiting serenely for Jesus, waiting, waiting – but he didn’t come. I wanted to see him, but nothing happened to me. Nothing! I wanted something to happen to me, but nothing happened.

Now it was really getting late. I began to be ashamed of myself, holding everyone up so long. I began to wonder what God thought about Westley, who certainly hadn’t seen Jesus either, but who was now sitting proudly on the platform, swinging his knickerbockered legs and grinning down at me, surrounded by deacons and old women on their knees praying. God had not struck Westley dead for taking his name in vain or for lying in the temple. So I decided that maybe to save further trouble, I’d better lie, too, and say that Jesus had come, and get up and be saved.

Suddenly the whole room broke into a sea of shouting, as they saw me rise. Waves of rejoicing swept the place. Women leaped in the air. My aunt threw her arms around me. The minister took me by the hand and led me to the platform.

When things quieted down, in a hushed silence, punctuated by a few ecstatic “amens,” all the new young lambs were blessed in the name of God. Then joyous singing filled the room.

That night, for the first time in my life but one – for I was a big boy twelve years old – I cried, in bed alone, and couldn’t stop. I buried my head under the quilts, but my aunt heard me. She woke up and told my uncle I was crying because the Holy Ghost had come into my life, and because I had seen Jesus. But I was really crying because I couldn’t bear to tell her that I had lied, that I had deceived everybody in the church, and hadn’t seen Jesus, and that now I didn’t believe there was a Jesus any more, since he didn’t come to help me.

Langston Hughes (1902-1967) was a renowned African American essayist, poet and author during the resurgence of African American literature in the early 20th century. His essay illustrates the toxic power of experiential faith applied by group pressure demanding religious submission at the cost of true conviction. This is a testimony that the Pentecostal and Charismatic movement surely needs to hear more than it ever has before ..    RDM

Back  To The SpiritWatch Home Page        Back To The Strange Fires