Where Is The Prophet Gwen Shamblin Hiding After Hurricane Katrina?

Originally posted on the now defunct Yuku message board used to facilitate contact with RF members and those outside the group, this is an article about the typical self-aggrandizing largesse of Gwen Shamblin who claimed to have predicted the events of 9/11 as judgment from God and that Hurricanes Katrina and Rita were also judgment upon New Orleans, Louisiana. This is a repost of that original article from August 29, 2006 which was archived when the Yuku board was shut down. It provides further insight into her ongoing attempts to use human suffering to legitimize her prententious claims to divine prophetic stature. The first of these storms, Hurricane Katrina, made landfall in Plaquemines Parish, Louisiana as a Category 3 hurricane on August 29, 2005. The second, Hurricane Rita, came ashore in southwestern Louisiana on September 24, 2005 going far west of the track Katrina had followed. 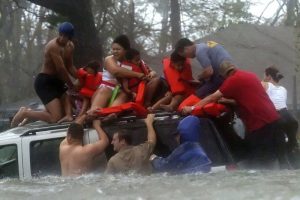 When Hurricane Katrina tore into New Orleans as well as the other communities of the Gulf Coast one year ago today, an interesting question to consider would be where Gwen Shamblin, the “prophet” of Remnant Fellowship, actually was.

Possibly, she stood before a television somewhere, whether in her office or in her mansion, hearing of the devastation. But it’s more likely that she was like many of us in America who lived outside the region going about our lives with little thought about what seemed like just another hurricane. It’s equally likely that she had her own business to deal with, telling a “Remnant saint” they weighed too much, or licking potato chips at J. Alexander’s in Franklin. She could have been huddled in a board room with her leadership cadre, planning their next social activity to keep Remnant society well indoctrinated yet too preoccupied to really notice this manipulative process.

It is also very possible that Ms. Gwen was, as she likes to claim, awake in the middle of that awful night and hearing God’s voice speaking to her. We are aware that Gwen’s authority in Remnant Fellowship is viewed as both divinely ordained and beyond question when wielding the weighty office of God’s prophet for the last days. And since listening to God late at night is what prophets supposedly do, Gwen would be unafraid to go on record letting the Remnant Nation know that this is how she hears from Him so she in turn can speak “the truth.”

So when hurricane Katrina’s storm surge flooded New Orleans, we have to believe that Gwen’s message to the Remnant Nation three weeks later was equally “inspired” of God. Three weeks of absolutely stunning media coverage didn’t hurt Gwen’s creative juices flow either – this is how an ex-member of Remnant recalled it:

Gwen went on and on the Wednesday (September 21) before Hurricane Rita came through. She continually spoke about the sin in New Orleans and how this next hurricane was going to completely destroy them now. She was mad at people in the church and said no one appreciated the fact that her and leadership had to continually counsel people about losing weight or whatever they were struggling with.

She said many times that God was going to pour out his wrath on Remnant if they didnt straighten up and become perfect in his sight. Gwen spoke about the destruction that God was bringing upon the earth especially the disobedient. She prophecied worse destruction from hurricane Rita than Katrina because God didnt want the sinful city of New Orleans back on its feet again.

Anyway after Rita came through and not much damage was done she didnt preach the next 3 services. Gwen was absent and no one was told where she was or anything.It was really strange,all hush hush and everything. No one was informed and leadership didnt tell where she was. She didnt speak about the hurricane again as far as I know. 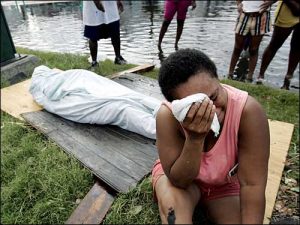 In my opinion she felt some type of conviction for being so hateful at the last service and probably felt a little uneasy about not being right. I believe she was convicted somehow because of how hateful she had been speaking about the people who were still having weight problems and other issues in Remnant .

Where indeed did Gwen go when hurricane Rita made landfall at the Texas/Louisiana border as a Category 3 hurricane .. and not in New Orleans? Her condo in Destin? Shopping in New York?

When sinful New Orleans failed to wash away completely as she said it would, she conveniently was not to be found for a week or so.

Her absence reminds me of the incident of 1 Kings 22:25 in which the false prophet Zedekiah was told by the godly prophet Micaiah what he would do when his lying oracle of the victory of Israel and Judah over their enemies at Ramothgilead failed: “Behold .. thou shalt go into an inner chamber to hide thyself.”

Remnant Nation, you owe it to yourself to ask those questions ..

If Gwen spoke the truth through prophecy, why did it not come to pass?

If Gwen is a true prophet, why does New Orleans still stand?

And where does Gwen herself stand NOW on the 1 year anniversary – could you comfortably go up to her after the next webcast and ask her why New Orleans still exists?